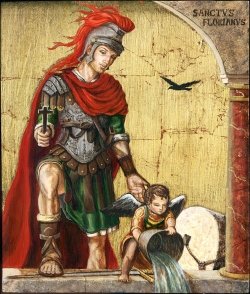 CrossFit Florian is named after Saint Florian.  He is the protector of those who fight the peril of fire with water, and those in danger of flood or drowning.

Florian lived in the time of the Roman emperors Diocletian and Maximian, and was commander of the imperial army in the Roman province of Noricum. In addition to his military duties, he was also responsible for organizing firefighting brigades.

The Roman regime sought to eradicate Christianity, and sent Aquilinus to persecute Christians. When Aquilinus ordered Florian to offer sacrifice to the pagan Roman gods in accordance with Roman religion, he refused, and cheerfully accepted the beatings of the soldiers, who used clubs, spikes and fire to torture him. He was executed by drowning in the Enns River with a stone tied around his neck.